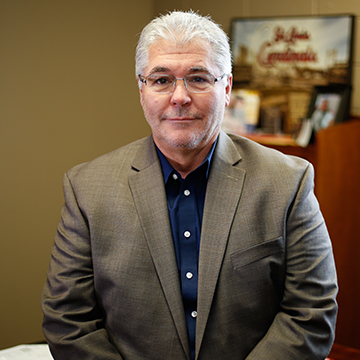 Mr. Reynolds worked in the public schools of Missouri and New Mexico as a teacher, coach, athletic director, principal and superintendent.  As a public-school administrator, Mr. Reynolds chaired strategic planning committees, developed educational partnerships with school and community, presented instructional workshops, and served as CFO for two different school districts.  Since coming to Faulkner, Mr. Reynolds has served on several academic and administrative committees, developing policies and good practices with a desire to better serve the students and Faulkner University.

The father of four children, Mr. Reynolds and his wife Karin chose to leave the public-school environment to bring their sons up in Christian education.  As a member of the University Church, Mr. Reynolds has served as deacon of education, classroom teacher, and in the prison ministry.

An active outdoorsman, Mr. Reynolds loves spending time with his family doing almost anything outdoors. His passions include bow hunting, camping, floating any river that has fish, and traveling with his wife to spend time with their children.