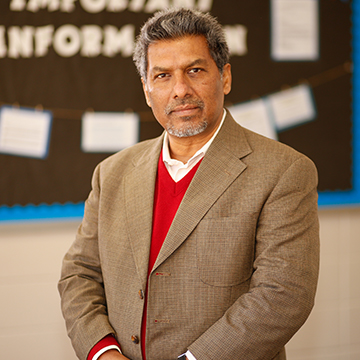 Dr. Theodore Sabir has degrees in chemistry, biochemistry and systematic theology. Sabir graduated from Loma Linda University School of Medicine and served as a faculty member in the department of chemistry at the prestigious Harvey Mudd College of Claremont University in California before coming to Faulkner.

Sabir teaches biochemistry at Faulkner and is on the doctoral faculty of Faulkner University, teaching the mathematical and scientific reasoning courses and advises the university on matters of chemical, environmental and health issues. He is a seasoned member of the American Chemical Society and holds active memberships in several other biochemistry, pharmaceutical chemistry and medicinal chemistry groups. He is an associate member of the Association of Physicians in America of Pakistani origin.

Sabir has taught as a college faculty in Florida, California and Alabama. Having served in various academic capacities, he excels in a cooperative team environment. Dr. Sabir for over a decade has been involved in discovering new methods of detecting (2S)-2, 6-Diaminohexanoic acid and its Analogs. L-lysine (2S)-2, 6-Diaminohexanoic acid 146.19 g·mol−1 C6H14N2O2 is a protein genesis molecule involved in chemical regulation. His interest lies in the chemical studies of its metabolic processes and atypical detection and the role it plays (if any) in health, longevity, disease, and death.

Sabir remains creative in his instructional and research methods by keeping abreast of the latest developments (published over 50 papers), and seeks to challenge his students to excellence by providing rigorous instruction, and guiding them into their chosen scientific careers in which they can have an impact for the Kingdom of God.

Dr. Sabir loves to spend most of his free time with his family, friends and international Christian missions.  His father (the late Burkett M. Sabir) was a servant of the Gospel of Christ in Pakistan who preached and taught Bible in that land for 60 years. Dr. Sabir traveled with his father and visited many Pakistani Christian communities.  Dr. Sabir is the co-founder of Sahiwal Bible College.  He and his wife (Joy) have four children (Geoff, Jon, Jake and Gillian Elizabeth), a dog (Rhys) and a cat (Percy). Dr. Sabir enjoys working with students and colleagues.