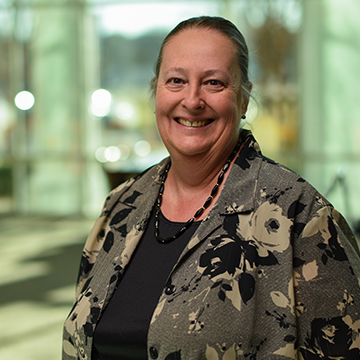 Gigi Panagotacos has served as the Assistant Director for Collection Development and Research Librarian at the Jones School of Law Library since 2005.  Prior to coming to Faulkner University, Professor Panagotacos worked at several academic law libraries in the southeast and in California. She was awarded a Bachelor of Science in Business Administration from Florida State University in 1984.  She continued her education at Florida State University, subsequently earning her Juris Doctor in 1989 and her Master of Library Science in 1994. She is a member in good standing of the Florida Bar.

Professor Panagotacos’ primarily duties include collection evaluation and development.  She provides research assistance to law faculty and students, Jones alumni, members of the bar, judiciary, and state government, as well as public patrons.  Further, she manages the Law Library’ references services, including the scheduling of librarians. She provides direction for library programs in training, orientation, and services for the faculty.  To this end, she manages and supervises the Law Library’s Faculty Research Assistance Program (FRAP Program), which entails her directing, teaching, and supervises several law students as they conduct legal research and prepare memoranda in response to specific legal research requests from the Jones law faculty in pursuit of their various scholarly endeavors.  Professor Panagotacos is also the point of contact for most of the Jones Law Library legal vendors and publishers. In that regard, she ensures that all law faculty and students have access to Westlaw, Lexis, CALI, and other subscription services. Professor Panagotacos conducts training sessions on the use of these sophisticated legal research systems.

Recent scholarly activities have included the following publications and presentations: