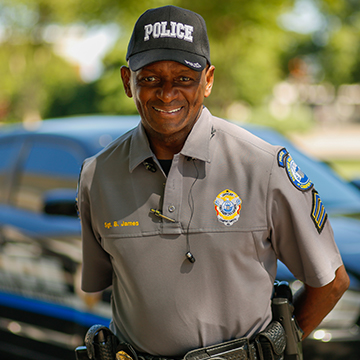 Sergeant James grew up in the projects of Montgomery where it was common for he and his siblings to sleep on the floor to avoid being hit by random gunshots fired by gang members in the neighborhood. His mother worked at Jackson Hospital for 35 years and his Father worked as a supervisor for the Grey Hound Bus Station. They marched with Dr. Martin Luther King during the Civil Rights March from Selma to Montgomery, fighting for equality and justice for all people. Sergeant James parents instilled into him discipline, motivation, and the courage to be a self-starter.

Sergeant James graduated from the Montgomery Police Academy in 1987 and he held the position of a supervisor in the Homicide Division as a (CSI) Crime Scene Investigator. Sergeant James transitioned to the Montgomery Regional Airport Police Department during the September 11, 2001 attack, where he held the position of both police supervisor and Firearm Instructor. He received the majority of his Counter Terrorist Training while working at the Montgomery Regional Airport Police Department.

Sergeant James proudest moments is marrying his wife Lisa of 26 years, and the birth of his four daughters. He accepted Jesus Christ as his Lord at the age of 19. During his free time, he enjoys reading, spending time with family, and watching Alabama football games.