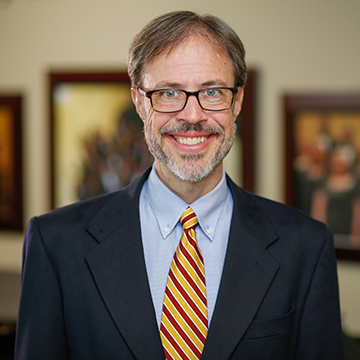 Dr. Allen Clements joined the music faculty in 2010 and serves as the director of choral activities.  He conducts the Faulkner University Chorus and Faulkner Singers and teaches Music Theory I/II, Sight Singing & Ear Training I/II, and Conducting. Clements earned his bachelor of music education degree at Harding University.  He went on to complete two master’s of music degrees at the University of Alabama; one in choral conducting and the other in music theory and composition. Clements earned his Ph.D. in music education from the Conservatory of Music at the University of Missouri-Kansas City.

From 2003-2010, Clements was director of choral activities at Southern Arkansas University.  In addition to performing regular fall and spring concerts and organizing an annual spring tour, Clements and the SAU choirs hosted the annual Masterworks Festival, inviting area high school choirs to join them in the performance of such works as the Handel Coronation Anthem No. 4, Haydn’s Missa brevis Sancti Joannis de Deo, the Faure Requiem, Schubert’s Mass in G Major and the Bach motet Jesu, meine Freude.  Clements and the SAU choirs frequently collaborated with the South Arkansas Symphony Orchestra and other area choirs to perform such major works as Beethoven’s Ninth Symphony, Holst’s Hodie and Orff’s Carmina Burana.

Clements has served as a guest conductor and clinician throughout Arkansas.  In 2004 he conducted the El Dorado Choral in a performance of Handel’s Messiah and, in 2005, he led the All-Region Senior High Mixed Choir at the Arkansas Choral Directors Association Southwest All-Region Choir Clinic/Concert.  His reviews of choral compact disc recordings are regularly published in the Choral Journal.  In 2009, Clements’ article “Minority Students and Faculty in Higher Music Education” was published in the Music Educators Journal.