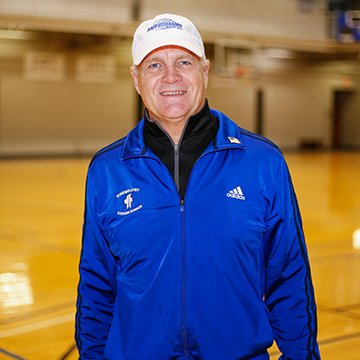 Dr. Terry Brown was born and raised in the West.  After growing up in Colorado, he received a bachelor’s degree in physical education and a master’s degree in sports medicine from Pepperdine University.  He taught for five years at Pepperdine before moving to Arizona State University to complete a Ph.D. degree in exercise physiology.  Searching for a teaching position in a Church of Christ-affiliated college, he was introduced to Alabama Christian College in 1984.  He has been the chair of the Department of Physical Education and Sports Management ever since.

Brown enjoys a variety of sports and believes in lifelong learning.  He has been studying Spanish for several years and has “immersed” himself in classes in Guatemala for two to three weeks for the last ten summers.  You may also catch him sitting in on the Spanish classes at Faulkner.  He most enjoys putting that Spanish to work twice a year on mission trips to Mexico with the Vaughn Park Church of Christ, at which he serves as an elder.  Don’t ask about his grandchildren, unless you have plenty of time on your hands.