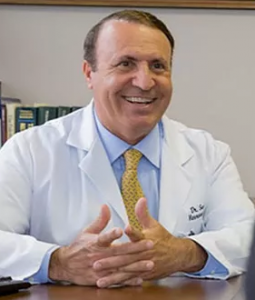 The Healing Hands Award is a “recognition of unique actions by individuals to promote the concept of healing, grace, comfort and inspiration to those whom have been struck by disaster, both natural and man-made, by responding to the needs of a neighbor, friend, or stranger, and thus motivating others to greater achievement,” according to ASF.

Swaid joins a list of high-caliber individuals who have been honored with the award including former President George W. Bush and former New York Mayor Rudy Giuliani in 2002 for their heroic leadership directly following the September 11, 2001 terrorist attacks.

In total, 10 individuals have been presented with the award for their “influence to the world around them, making it better and setting an example for others to emulate,” according to ASF.

Swaid was presented the award in June during the televised broadcast of ASF Foundation’s Alabama State Games Opening Ceremony.

“This is a great surprise,” Swaid said in response. “I had no idea this was going to happen tonight and I thank you. God bless you. It’s an honor to live in the great state of Alabama and to take care of its people across the state.”

Swaid was attending the ASF State Games to support his wife, Christy Swaid, founder of HEAL Alabama, an organization created to promote healthier lifestyles among children, who was participating in the games events.

Swaid, who was born in Eilaboun, Galilee in 1952 and came to the United States in 1969 to study at Harding University and UAB Medical School, is board certified by the American Board of Neurological Surgeons, a member of Alpha Omega Alpha, and a Fellow of the American College of Surgeons.

Swaid maintains a busy, private neurosurgical practice in Birmingham and specializes in cranial surgery, radiosurgery, treatment of Trigeminal Neuralgia, and cervical spine disorders. He has treated patients from all over the world who have sought him out to treat their complex brain and spinal conditions.  Having performed surgery on many physicians across the southeast, Dr. Swaid remains the doctor’s choice for neurosurgery.