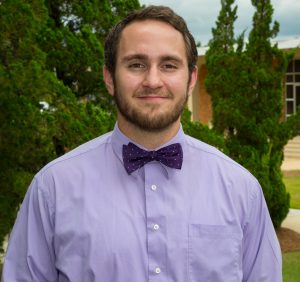 Andrew “Gif” Gifford never realized how Faulkner University would change his life when he decided to pursue his undergraduate there.

During that time, he grew to know his professors as mentors and friends.

“Some of my favorite moments were the times spent with classmates gathered around a professor’s car after class for several hours learning more about education and life principles than we ever could in a classroom,” he said.

He currently works in the Admissions department for Faulkner and is grateful for finding employment in such a Christ-centered environment, he said.

“I distinctly remember the first admissions staff meeting we had after I started working began with prayer requests,” Gif said. “That stuck out to me because I could have been at any other job right after college and experience something totally different, whereas here, starting with a prayer is commonplace.

“Our school is an incredibly valuable tool both for learning and for faith-building. I’d love to see more students enroll in a graduate program, but even if they don’t I want them to know and see that Faulkner is worth the time and the effort that we all put in to be here.”

Gif would like to eventually teach at the college level. He enjoys music, reading and competitive dog grooming.