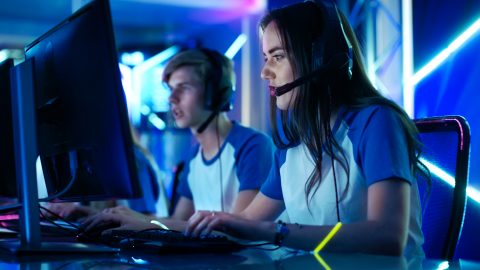 Faulkner University is excited to announce plans for a new eSports team scheduled to begin competition in the fall of 2022!

Esports, organized video competitions, is exploding in popularity across high schools, colleges and universities throughout the country. Since competitions are virtual, they can be broadcast online for viewers to watch around the world.

Faulkner’s plans are to establish an official esports varsity team. Unlike traditional sports, esports is a participant sport that anyone can play.

“Esports is in high demand right now among high schools and it’s growing at an incredible rate among colleges and universities,” said Mark Hunt, Vice President for Enrollment Management. “Esports is something you can participate in from anywhere in the world and we already have a large number of students on campus who have expressed interest in participating and growing the sport.”

Faulkner's Esports arena will be housed in the university's Multiplex and will include new computers, monitors, gaming chairs, desks, special lighting, production equipment and a live viewing area along with outside viewing areas.

Esports teams can include up to six players at a time, smaller teams or even individual tournaments, depending on the game.

According to gaming analytics company, NewZoo, the fan base for esports is expected to include nearly 729 million people by the end of 2021, a 10% increase from 2020.

Prospective students interested in eSports should contact the Admissions Office at 334-386-7200 or inquire by email to admissions@faulkner.edu.