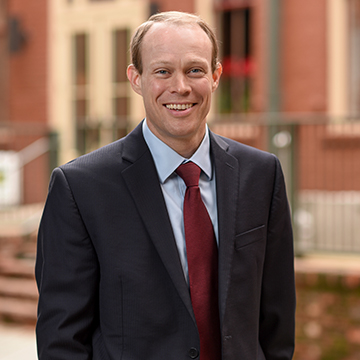 Adam MacLeod is a Professor of Law at Faulkner. He is also a Research Fellow of the Center for Religion, Culture, and Democracy. He has been a Visiting Fellow in the James Madison Program in American Ideals and Institutions at Princeton University and a Thomas Edison Fellow in the Center for the Protection of Intellectual Property at George Mason University. He is co-editor of the fourth edition of Christie and Martin’s Jurisprudence (West Academic 2020) and author of Property and Practical Reason (Cambridge University Press 2015) and other books. He has also published more than one hundred articles, essays, and book reviews in peer-reviewed journals, law reviews, news outlets, and journals of public opinion.

Professor MacLeod writes and speaks about the foundations of private law and private ordering. He teaches courses concerning property, intellectual property, jurisprudence, and private law theory. He is an instructor in the James Madison Program’s graduate seminar on the Moral Foundations of Law. He contribute to conferences, colloquia, and consultations at major research universities around the world, including in recent years National Law University Delhi, University of Navarra, Boston University, Louisiana State University, Michigan State University, Queen’s University Ontario, Princeton University, Troy University, Pepperdine University, and George Mason University. He speaks at events hosted by groups devoted to public education such as the American Constitution Society, the Sallux Foundation, and the Acton Institute.And he contributes to journals of news and public opinion such as the Washington Times, National Review Online, New Boston Post, Public Discourse, and Law & Liberty.

SOME SELECTED PUBLICATIONS AND PRESENTATIONS:

Some Select Book Reviews and Essays: